White people kill the land, they poison the air and contaminate the water, so they have to move again and again.

I identify as a Yaggera Turrbal man; being brought up white but forever connected to Country, I saw my adoptive parents squeezed out by the Qld government for a school; I had joined the Navy at 15 and saw degradation and understood over population; how and why whites will never be happy / connected to Country.

They have been indoctrinated to see everything as a saleable commodity, that happiness is a big bank balance… they even created Medicare they first said was free (sort of like Bob Hawke “no child in poverty”).

They are never happy with just good health, family or Country, they buy so much stuff, there are buildings with other stuff they own, but won’t use, collecting dust.

They kill the land, they poison the air and contaminate the water, so they have to move again and again.

I am 70 now and nobody wants to be told what is wrong. I can’t help, we oldies can’t help… most younger people think we are in their way, won’t let go of stuff they think is rightfully theirs.

White people won’t stop, they are infected and don’t want to understand that they are part of a big herd, controlled by a few other white people, they are free range stock, to be made money from. 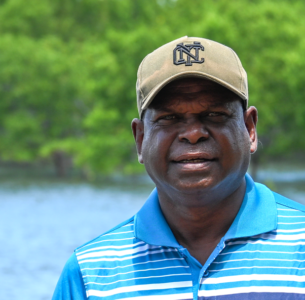 As a Boigu man I have specific responsibility to protect cultural sites that are sacred to all Guda Maluyligal people. But the rising sea is making it impossible.