In the past five years in the Northern Rivers, we’ve had: Cyclone Debbie (historic flooding), severe drought (driest November on record, 2019, driest winter on record, 2021), bush fires (rain forest burnt) that burnt so long in every direction that our skies were filled with smoke from every wind direction, for over 3 months.

Fun breathing that all in just before Covid. Lungs, anyone?

Then last year we had (after the driest winter) an unseasonably wet spring with violent storms in early December and it rained, virtually non-stop, for nearly 5 months. Lismore flooded twice in a month, with the biggest flood causing so much damage to infrastructure that we are still living, months later, in a disaster zone.

I have only just been able to shop at my usual shops for food, four months after the fact. Before that I was sourcing from shops in all directions, driving up to 50km to other towns to get my needs. Landslides have closed roads, doubling journey times and lengths.

Nobody in this region is unaffected; roads, services, shops, landslips, mold, mental health, businesses, jobs lost…. all after a very intense 5 years, plus covid. Nearly all of my vegetables died from saturation, my garden is only just now starting to produce again. The pecans didn’t fruit this year – too much rain at the wrong time, and the bees couldn’t pollinate them.

Our town/area had no fuel for over a week because the highway was blocked by flood waters – we couldn’t work for two weeks because we didn’t have enough fuel to risk getting to the petrol station and them having run out already when the fuel finally did get through. There was no food arriving either. So much has been damaged and lost.

We’ve had summers recording 46 degrees when the long term average sits around 33. We are impacted on a daily basis. The mental health of people overall is suffering. I had to take anti-depressants after the flood; the long term effect on my mood at witnessing and working around the damage was heart breaking and bleak.

There is so much more – and I am one of the lucky ones in all of this. 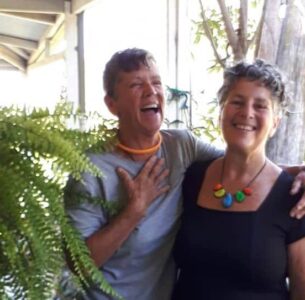 Everything was so smoky, you couldn’t escape it. And it was thick red smoke - something I’d never seen before.